The following has been posted on Lord Lexden’s website:

The Whitbread Memorial Prize is one of the two leading awards made annually by the Independent Schools Association, of which Alistair Lexden is President. The Prize recognises outstanding achievement at GCSE combined with dedicated community service among the Association’s 370 member schools.

In 2015 there were some 800 entrants. The winner was Christian Smaditch, a brilliant and charming pupil at Dixie Grammar School in Market Bosworth in Leicestershire. On 1 February he came to the House of Lords to receive the Prize, accompanied by his parents, by Richard Lynn, head of Dixie Grammar and by Paul Smith, chairman of governors. They made a really stimulating and memorable group.

Last year he was awarded seven A*s and three As at GCSE. His greatest loves in his school work are music and medicine. They form the basis of his impressive work in the wider community too. As Richard Lynn has put it, ‘he has been recognised across Leicestershire for his work by being awarded the Lord Lieutenant’s Young Artist of the Year 2014 award’. An accomplished, prize-winning pianist and horn-player, he organised a concert at Leicester Cathedral last year which raised £3,500 for his chosen charity, the Joe Humphries Memorial Trust. He also led  his school’s team to victory in the regional finals of a competition held by the Royal Society of Chemistry. Week by week he fosters understanding of heart problems among younger children, helps train people in the use of a defibrillator and volunteers as a ward assistant at Hinckley Community Hospital.

Presenting Christian with his Prize, Alistair Lexden said, ‘ I shall remember you for four Ms: music, medicine—in which you have already made  such a  mark—mankind for whose welfare you obviously care, and finally for magnificence which sums up your total achievement’. There was also a fifth M which he should have added: modesty. 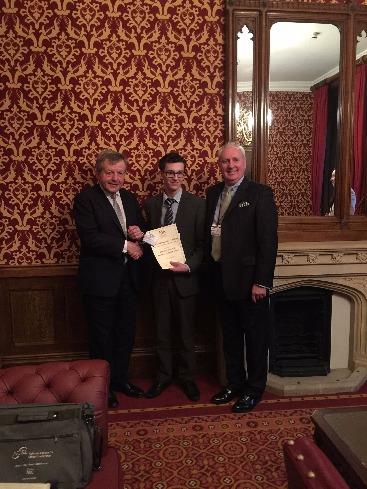