Students – new and old – and Mrs Malde took part in the traditional, annual wreath laying on the grave of Herbert Black, former student of the Dixie Grammar School. Walter Baynes, former pupil and researcher/archivist for the DGSA – Dixie Grammar School Association – shared his encyclopedic knowledge of the School’s history.

The plaque was unveiled in 2008 to Herbert Ernest Black, former student and only Battle of Britain casualty buried in the County (grave at Ibstock). Herbert Black was not known by the Dixie Grammar School Association to be a former student, until the Battle of Britain Historical Society’s project to unveil plaques in the former schools of all Battle of Britain casualties. Since then, members of the Dixie Grammar School Association have carried out extensive research and compiled a fascinating collection of information and images relating to him.

DIXIE GRAMMAR SCHOOL IN HONOUR OF SGT PILOT HERBERT ERNEST BLACK RAFVR 32, 257 AND 46 SQUADRONS ROYAL AIR FORCE A FORMER STUDENT OF THIS SCHOOLTO COMMEMORATE HIS CONTRIBUTION TO THE BATTLE OF BRITAIN IN 1940 NEVER IN THE FIELD OF HUMAN CONFLICT WAS SO MUCH OWED BY SO MANY TO SO FEW THE BATTLE OF BRITAIN HISTORICAL SOCIETY 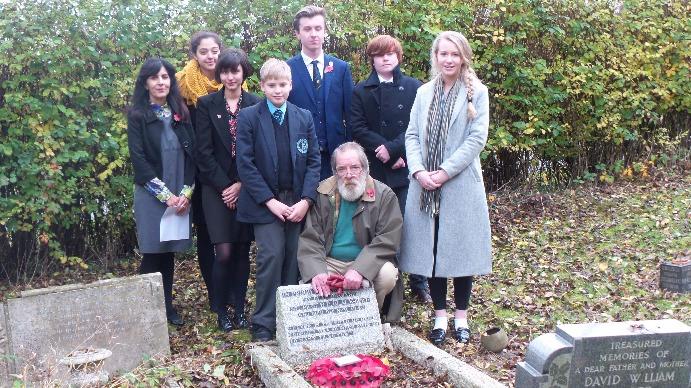