Dixie Grammar School A Level Results 2018This morning, the Dixie Grammar School celebrated another excellent set of A level results, with over 10% awarded at the coveted A* grade. The young men and women leaving the Dixie do so assured of a very bright future ahead. Despite warnings of turbulence in A levels results by the media, by 9.20am all those choosing higher education or advanced training had secured places on their desired courses – no Dixie students were put through the trial of Clearing.

Special mention should be made of Amy Hemsworth who with three A* and three A grades goes on to study Law with German Law at the University of Oxford. George Bacon secured the perfect three A* grades out of three, Hannah Mihsein one A* and two A grades and they both now study Medicine at Nottingham University. Lauren Nicholls is the third of our medics to secure a highly sought after place next year at the University of Leicester. Our Upper Sixth have also enjoyed success in applications to read Law – Anisha Mackay scored one A* and two A grades and reads Law with French and French Law at Nottingham University. Josh Melen will also be studying Law next year. A further five of our thirty six students are going on to study Engineering related degrees, underlying the strength in diversity of the Dixie’s provision. These results reflect a great deal of hard work both by our talented students and our dedicated teachers. However, the highest grades do not necessarily represent the greatest achievement and we are immensely proud of the very many students who have met or exceeded their own expectations. Examination results alone fail to take account of the personal qualities, employability and leadership skills on which we place such emphasis at Dixie and which our departing Upper Sixth students have in abundance. Richard LynnHeadmaster 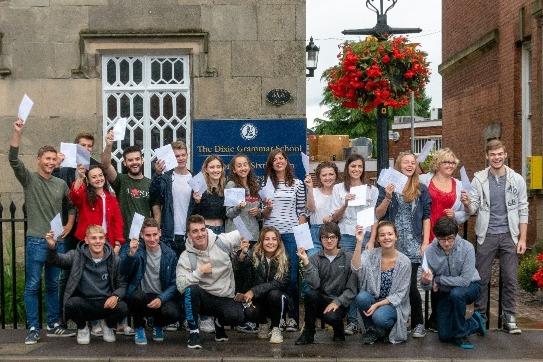