Chloe ISA Athlete of the month
^

Chloe ISA Athlete of the month

A student in the Lower Sixth at Dixie Grammar School, Market Bosworth, has been named the first ever Athlete of the Month by the Independent Schools Association in a new national initiative.Chloe Vinestock has been competing in athletics for about four years at both regional and national level and was ISA National Champion in Long Jump in 2017 and 2018.In 2018 Chloe decided to take part in the Discover Your Gold programme, run by UK Sport, which aims to find athletes successful in one discipline and transfer their talents to another sport. Following initial testing and ever more competitive selection phases, Chloe was one of 10 girls to be selected by British Cycling to work with them as a talent transfer athlete for an initial period of six months. Training five times a week and attending residential camps all over the UK is a huge commitment, but one Chloe is enjoying immensely and which brings with it the chance to join British Cycling’s world class programme full time.ISA schools across the country may enter one pupil per month into the ISA competition, with the goal being to celebrate the wonderful success stories of these young people. All nominations are shortlisted to three finalists with the winner being decided according to votes via Twitter.Mr Christian Fielding, Head of PE and Games, commented, “We are immensely proud of Chloe’s achievements and the message it offers all of our students, that success in one area often leads to success elsewhere as well. There is huge support for Chloe throughout the school community and winning the first award in this new initiative is no more than she deserves.” 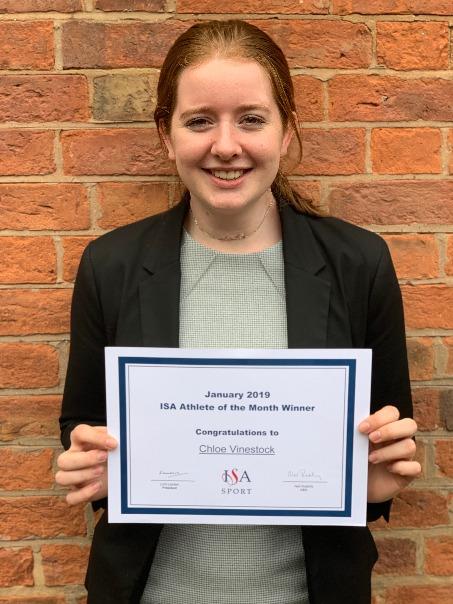