A young sailor has been selected to join the Royal Yacht Association Midlands Regional Development Team. Imogen Green got her first taste of sailing in Year 5 as a student at Dixie Grammar School and has gone from strength to strength since then.
A member of Draycote Water Sailing Club, she has been trained there for the last 6 months by the RYA and Olympic coach, Steve Irish, in both the youth development boat, the Topper, and the RS Feva, a double-handed RYA advanced development boat.
Imogen’s efforts throughout the summer on the water, learning tactics and attending debriefs on Zoom calls, have led to fantastic success in the recent National Series, held at Draycote WSC. This event is open to all Topper sailors from across the country and regularly delivers some of the best single-handed racing in the country. Imogen more than held her own against her often more experienced competitors, managing to be placed 5th, 4th and 3rd in her best three races, clearly earning her first place in her age category.
The RYA Development Team programme consists of 6 full weekends on the water throughout the winter, being trained by a team of world-class coaches. It is the first step along the RYA development pathway which can culminate in the Olympics and Imogen is determined to get there. 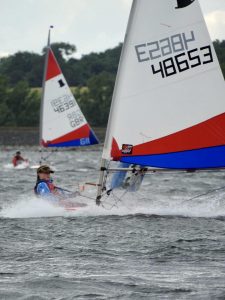