With ever changing instruction, moving goalposts and in the midst of great uncertainty, Dixie teachers have remained calm, inspired confidence for students, sought and secured the firmest evidence of achievement and guided Dixie’s A level cohort 2021 to these impressive results. Making full use of our seamless remote education, students in their turn have shown incredible resilience and fortitude as the various demands of the academic year have played out. They fully deserve this recognition for their outstanding successes.

Whatever is written about exams this year, Dixie students should not be penalised for the remarkable job our whole community has done in securing such success in the most arduous of circumstances. Governors, parents, teachers, support staff and students have formed the tightest team and together have supported and encouraged Dixie young men and women to these impressive heights. Our bespoke one-one pastoral support throughout the Sixth Form and with UCAS has ensured the overwhelming majority take a place at their first choice university. We are immensely proud of them all.

Some of the individual highlights are given below:

Helena Brown Biology A* Chemistry A* Maths A*

Helena joined the Dixie in Year 7 and throughout her time at the School has been a diligent, hard-working and focussed student. She always worked without fuss to the best of her ability – characteristics a future employer will greatly appreciate! Helena carried out her role as Deputy Head Girl with distinction, taking on the mundane tasks as well as the high profile ones to enable all students to feel they are part of the Dixie Community – even throughout lockdown. Helena worked closely with younger pupils through our Outdoor Education programme and also completed a Peer Mentoring qualification, enabling her to support pupils pastorally – a testament to her caring and thoughtful nature. Helena returned after final assessments to work as a teaching assistant – a role in which she excelled. Helena goes on to Durham University to study Natural Sciences.

Alex Joined the Dixie in Year 6 and his polite, conscientious approach to studies and self-motivation have brought great reward. Whether it be taking part in the World Challenge expedition to Madagascar or working as project leader for his Young Enterprise team, Alex has shown considerable strength of character and demonstrated that he is someone on whom others can rely. Alex goes on to the University of Leeds to study Computer Science.

Olivia has been at the Dixie since age 3 – she started in Pippins – and throughout her time has been an absolute pleasure to have as part of the School. Olivia’s approach was always characteristically pragmatic – she got on with things with little fuss and at other times could be found with her nose in her latest book. Olivia has left no stone unturned in her pursuit of excellence and this is most readily seen in her outstanding art portfolio and her deeply impressive EPQ project on Market Bosworth. Outside the classroom, Olivia was a highly responsible Prefect and also took a Peer Mentoring qualification, enabling her to offer support to younger members of the School. Olivia goes on to Cardiff University to study Architecture.

Laila joined the Dixie in Year 7 and her conscientious, focussed and diligent approach have fuelled her pursuit of excellence, which showed no bounds – both inside and outside the classroom.  Laila participated in a wide range of clubs and societies, helping to found our History society and to run DOSE sessions for younger students. She has also worked through her Bronze, Silver and Gold Duke of Edinburgh Awards, as well as helping to lead our vibrant Student Council and act as co-editor of the student newspaper. Laila goes on to the London School of Economics to study International Relations and History.

Flyn Higginson Chemistry A Further Maths A* Maths A* Physics A*

Flyn joined the Dixie for the Sixth Form and his confident and engaging, positive and resilient approach, allied to his gentle, personable nature have led to great success. Flyn benefitted from Dixie’s small classes, particularly in Further Maths and he was able to study for the equivalent of far more than two A Levels in Maths! Flyn also completed our Maths Leaders Award, took a leading part in the Young Enterprise programme and was a key member of our football and rugby teams. We wish him well as he goes on to study Mathematics at Durham University.

Simran joined the Dixie in Year 7 and has benefited from and given a great deal to a strong circle of friends. Consistent, honest and dependable, Simran offered much, not least with Comic Relief and in her role as a Peer Mentor. As a keen linguist, it was no surprise that Simran also offered invaluable support to younger pupils as a Languages Leader. Simran started learning Mandarin in Year 7 and achieved the highest grade possible in her A level in Mandarin – above an A* – and goes on to Durham University where she will be reading Chinese Studies.

Victoria Mayfield English Language A* Geography A* History A*

Victoria joined the Dixie in Year 6 and leaves as a most mature, focussed and confident young woman with a hugely positive outlook and demeanour.  Her leading role in the school’s Comic Relief celebrations was greatly appreciated and she excelled in this challenging year as York House Captain. A keen sportswoman, Victoria has played a key role in this aspect of School life and is also a highly accomplished golfer. Victoria goes on to study Law at Nottingham Trent University, but will undoubtedly continue to pursue and develop her career in sport.

Katy Hurst English Literature A* French A Geography A*

Katy has been one of the stand out Head Girls in recent memory.  Her unerring positive approach, honest acknowledgement of challenges and unfailingly cheerful demeanour are exemplary characteristics which, coupled with her determined application to work, embody what we value most in Sixth Form students at Dixie.  Whilst this year may have imposed certain unwanted limitations, the role of our most senior students to lead and to inspire has never been more important and I hope Katy is as proud of, as we are grateful for, her influence and the example she has set. Katy helped support the start of our popular Christian Union and returned after final assessments to work as a teaching assistant in Year 6, alongside her Dixie university transition course. Katy moves on to study Combined Honours at Newcastle University. 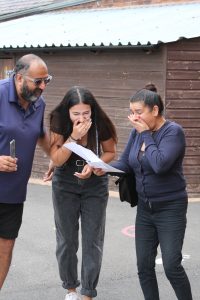 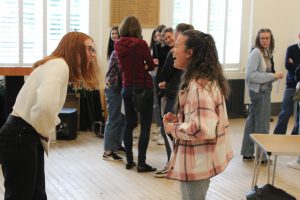 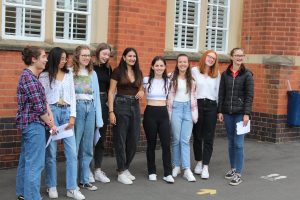