More than 30 of our Year 5 pupils were able to take part in a poignant Remembrance Day ceremony to mark the 100th anniversary of a local World War One Memorial.

The service took place at the Hornsey Rise Memorial and Peace Garden in Wellsborough, exactly 100 years after the first service was held.

The Memorial was erected in 1921 to honour 380 members of the NATSOPA printers’ union who were killed during the 1914-18 conflict and it has recently been restored by developer Adrian Burr, chairman of the Leicestershire firm Springbourne Homes.

Mr Burr hosted the Remembrance Day ceremony but it was the Dixie pupils who were the centre piece as they combined their WW1 classroom studies with paying their respects at  a local landmark heralding the sacrifice of so many.

Mrs Emma Billington, Head of Dixie’s Junior School and Nursery, said: “We were delighted to attend the centenary of this WW1 Memorial, which is just a short walk from our school.

“It really was an excellent opportunity for our Year 5 pupils to experience a Remembrance Day ceremony and to make the link between their study books and a tangible piece of World War One history right here on our door step.”

Springbourne boss Mr Burr added: “It was so rewarding to welcome the children to the ceremony and see them learning about some local history.

“I was able to tell them the story of the Memorial itself, how it was first erected in 1921 in the grounds of the NATSOPA Care Home in Wellsborough, but was then left forgotten and neglected after the home closed down in 2012.

“When Springbourne acquired the site I found the Memorial all overgrown, damaged and desecrated by thieves who’d stolen the brass plaque. I was determined to restore it and launched a nationwide search to uncover its history, all of which was explained to the children and really resonated with those key Remembrance phrases – “Lest We Forget” and “We Will Remember Them.”

Parish councillor Diana read the famous ‘For The Fallen” poem, by Laurence Binyon, ahead of a one minute’s silence, which was observed at 11am. 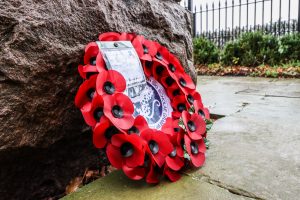 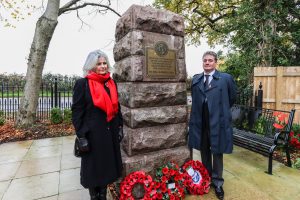