Pupils from Year 5 and Year 6 at the Dixie Grammar School travelled to Kidderminster last month to compete in the Independent School Association (ISA) Midlands Tournament. The team played four group games and topped the table after being undefeated. This meant they went into the top league for the second part of the tournament. Again the team played some amazing football and battled hard through all the games to remain undefeated and be crowned Midlands Champions, winning all eight games, scoring twenty goals and only conceding three.

The team now has the chance to represent their county in the National Finals on the 11 March 2022 area at ‘St Georges Park’.

Built in 2012 and set in 330-acres of stunning Staffordshire countryside, St. George’s Park is the home of England’s national football teams. With fourteen outdoor pitches, including a replica of the Wembley surface, a full-size indoor 3G pitch, a suite of rehabilitation and sports science areas, and an indoor futsal arena, St. George’s Park provides world-class facilities for the England teams ahead of international fixtures.

“It was a fantastic tournament from beginning to end and I’m so proud of our team. They played very well in all the matches and fully deserve the win and the opportunity to play at St Georges Park. Equally important to us at the Dixie was the way in which the team handled the day. They showed great maturity off the pitch as well as on it and were a credit to themselves, their families and the school. Making it through to the Nationals is a special achievement and so it has created a real buzz amongst the children at school.” 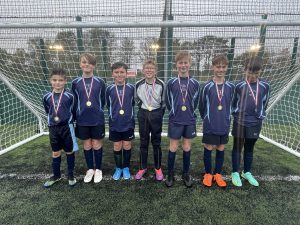